We all know what wedding rings are, but -what are eternity rings? What sets them appart and when should they be given? Let’s take a look at their meaning, differences and styles feauting some gorgeous Shesaidyes* examples.

What is an eternity ring?

An eternity ring, also known as «infinity ring«, is a woman’s ring featuring a band of precious metal (usually gold), set with a continuous line of identically cut gemstones to symbolize never-ending love between two people.

What’s the difference between a wedding band and an eternity ring?

In terms of design, the main difference between eternity rings and wedding rings is the presence of diamonds or gemstones. Most wedding bands are plain metal, usually matching the metal featured in your engagement ring.

On the other hand (no pun intended), moissanite eternity bands feature a line of moissanite diamonds that encompasses the entire circumference of the band. Traditional eternity rings do the same with diamonds or other gemstones.

However, it can be tricky sometimes trying to spot the difference because many wedding rings nowadays feature some kind of gemstone, and moissanite weddings bands are becoming more popular.

And what about the difference between an eternity ring and engagement rings?

At the same time, engagement rings are meant to be given with the intention to add a wedding band in the future. Eternity rings are not necessarily tied to marriage, even though they symbolise eternal love.

When should I give or receive an eternity ring?

There are some stunning anniversary rings for her that you can customise to match her engagement and wedding ring combo. Try to match their metal color (gold, white gold or rose gold) and their choice of gemstone. You can also add your partners’ birth stone in for a personal touch.

Which finger do you wear an Eternity Ring on?

One of the most usual ways is to wear an eternity ring on the ring finger on your left hand, sitting on top of both the wedding ring and engagement ring. Those three rings stacked together can look mesmerising, especially if they all match each other. 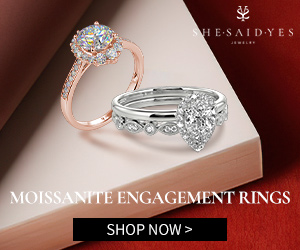